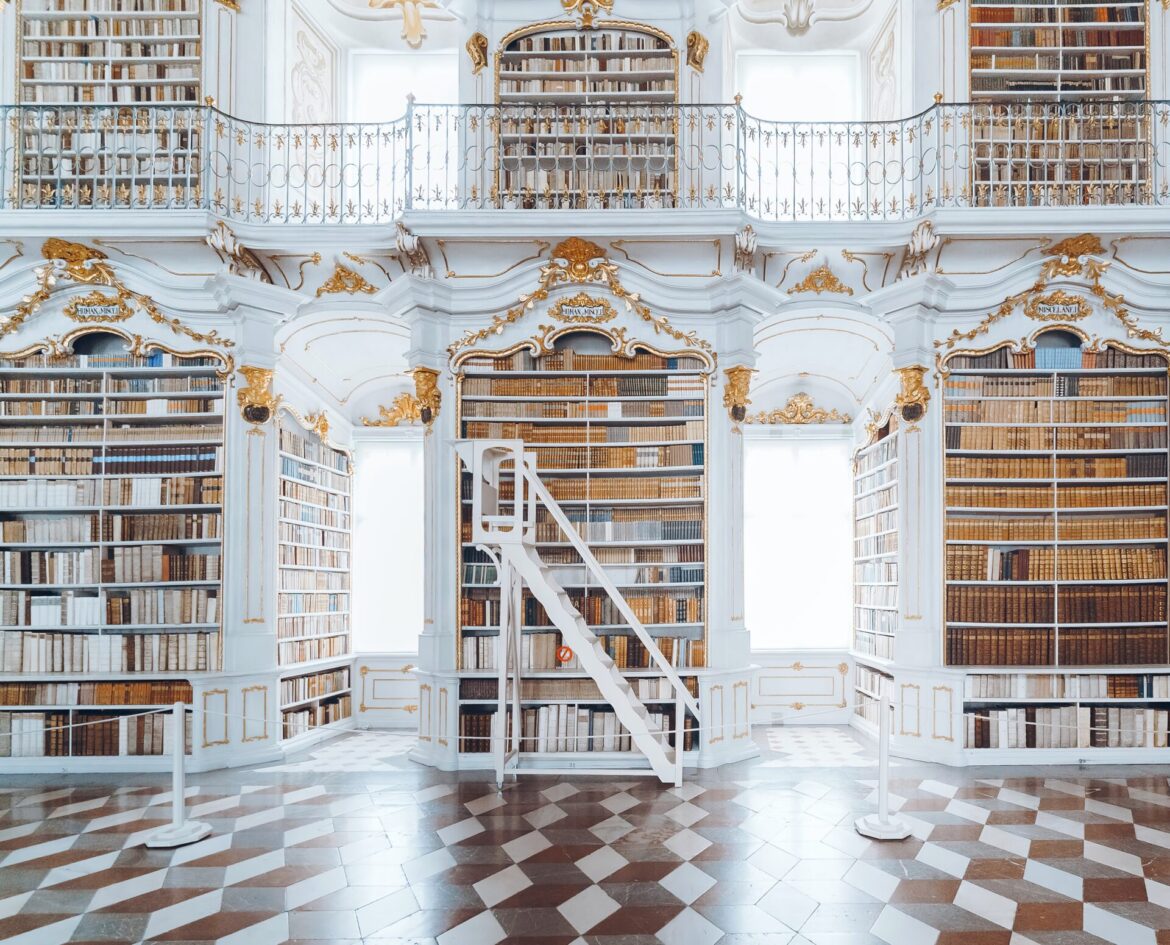 The Most Beautiful Libraries in the World

There is something about libraries that just makes them so special. Maybe it’s the quiet atmosphere, or the smell of old books. Whatever it is, libraries have a certain magic about them that cannot be found anywhere else. In this blog post, we will be taking a look at some of the most beautiful libraries in the world. These libraries are truly amazing and are worth a visit!

Admont Abbey Library is the largest monastic library in the world and is located in Styria, Austria. The library’s beauty is a result of firstly the architecture Josef Hueber who built it in 1766. Secondly, Bartolomeo Altomonte created the jaw-dropping frescoes painting on the ceiling. Lastly, the sculptural decorations by the sculptor Josef Stammel added to the buildings beauty.

Furthermore, the library features around 200.000 volumes, which include more than 1400 manuscripts and around 500 rare and valuable books printed before 1501.

It is no wonder that we consider the Admont Abbey Library one of the most beautiful libraries around the world with its stunning gold and white interior, awe-inspiring structure, and its treasure of books.

The Radcliffe Camera is an iconic Oxford landmark and a working library part of the central Bodleian Library complex.

The library is also known as the Rad Cam and as the heart of Oxford. Also, it was the first example of a circular library in England! The Radcliffe Camera was built in 1737-1749, and today it functions as the main reading room of the Bodleian. Also, it is home to the History Faculty Library.

Most importantly, an underground bookstore lies beneath the lawn to the north of the Radcliffe Camera, and the Gladstone Link tunnel connects the building to the Bodleian Old Library, which is one of the oldest libraries in Europe.

Therefore, we strongly recommend checking out Bodleian Old Library when you visit the Radcliffe Camera.

Trinity College Library serves Trinity College and the university of Dublin. It is the largest of the Cambridge college libraries with a total book stock of around 300.000 volumes!

The library is famous for its single-chamber room pictured above. It is 65 meters long and is the main chamber of the library. Queen Elizabeth I established the library in 1592, and some may even call it an ancient library. However, the reality is that it has only been working since 1732, and has books that are older – some from the 9th century! It is probably one of the oldest surviving libraries in Europe.

It houses 200.000 of the library’s oldest books in its oak bookcases, as well as historical artifacts and manuscripts like the Book of Kells. One of the four volumes is on public display at any given time, so we recommend checking it out when visiting this beautiful library.

The Baroque Library first opened in 1722 as part of the Jesuit university based in Klementinum, Prague. Meaning that is was a university library.

The Baroque Library’s interior has been preserved since the 18th century. The hall is decorated with ceiling frescoes by Jan Hiebl depicting educational allegories and portraits of Jesuit saints, patrons of the university, and prominent representatives of this order.

It is no wonder that it is considered one of the most beautiful libraries in the world.

The library was declared a public university library in 1777. Approximately 10 years later, its director established a collection of literature written in the Czech language called Biblioteca Nationalism, thereby giving the basis for a national library. This collection is now referred to by the same name and is located on the upper floor of the main reading room at the gallery.

The Tianjin Binhai Library was built to provide a cultural district in the city of Tianjin, China. It is part of the Binhai Cultural Center and was designed and built in only three years!

The building has a futuristic vibe with its stark white interior, terraced shelves that cascade from floor to ceiling, and the luminous sphere, which locals refer to as the Eye.

The library has the capacity to hold more than 1.35 million books!, It is no wonder that it is one of China’s buzziest new attractions!

Guangzhou Library is a public library in Guangzhou, China.

The total collection of Guangzhou Library reaches 10.68 million volumes. There are 4500 seats, 740 computers for public use, and the library has almost 10.000 visits a day! In 2011 it was on the list of top attractions in the city, and we understand why with its modern building and the sheer size of the library.

The Taipei Public Library has several branches, but the one we want to highlight in this blog post is the Beitou Branch, which we think is one of the coolest libraries!

It is located within Beitou Park near some hot springs in Taipei, Taiwan.

This library is on of the famous libraries in Taiwan because it is the first green library! It has several eco-friendly features, such as its wooden structure, solar panels, and a drainage system that collects rainwater to water the library’s plants and flush the toilets. The green initiatives makes it one of the most beautiful libraries in the world!

It is an excellent stop for its architectural uniqueness, and don’t forget to enjoy the library’s collection of Chinese and English literature.

Library Orchard is a public library under the National Library Board of Singapore, which manages free public libraries throughout the country.

The Library centers on lifestyle, design, and the applied arts. It is divided into two main zones: the loft and the studio. The studio is on the ground floor of the library, and the loft is the second store.

It is also the first double-story mall library, and while it does not houses over a million books like some of the other libraries, it does have a collection of around 10.000 books!

It is one of the beautiful libraries with a modern feel and gives off a unique vibe like no other. This library deserves a visit for its minimalistic space, curvy bookshelves, and stark white walls.

The George Peabody Library opened in 1978, and the Baltimore architect Edmund G. Lind designed the library in collaboration with Dr. Nathaniel H. Morison.

The library is well known for its 300.000 volumes, mainly from the 19th century. The books range from religion, British art, architecture, topography, history, art and art history, and much more.

But what draws visitors to this incredible library is the cathedral-like atrium, marble floors, and cast-iron balconies, which rise dramatically to the skylight 61 feet above the floor. It is truly one the most beautiful libraries in North America.

The New York public Library is one the instagram-worthy libraries around the world due to the amazing ceiling mural in the Rose Main Reading Room.

The Rose Reading room is located on the 43nd street and Fifth Avenue in Manhattan.

In 2014 one of the pieces from the mural came loose and crashed to the ground. It was clearly time to repair and renovate. Resultingly, the reading room was close for almost 2,5 years before it reopened again.

The famous New York reading room is located in the Stephen A. Scwarzman Building of the New York Public Library. It is rather famous and has appeared in movies hundreds of times!

PS. If you are looking for a place to stay while in Manhattan, you should check out this blog post here.

We think that this library is one of those magnificent libraries in the world known for its majestic appearance. It is located in the heart of New York City.

The library began as a personal library of Pierpont Morgan, but after Mr. Morgan’s death, his son realized that the library had become too important to remain a private library. As a result, it became a public library.

Today it works as a library and a museum. Some might argue that it could work as one of the art galleries found in the city. The reason is that the Morgan Library & Museum is also a major exhibition venue for fine art.

It is one of the most beautiful libraries in South America, and we understand why. The library is located in the city center of Rio de Janeiro Brazil. Also, one of the most significant libraries in the country due to its history. The idea of creating the library came from a group of 43 Portuguese immigrants who wanted to spread culture and literature among the Portuguese communities living in Brazil.

We could add so many more libraries to our list, but we don’t want to overwhelm you. However, what we will do is mentions some other libraries that are worth a visit.

It’s hard to pick a favorite from our list of the most beautiful libraries in the world, but we would love to hear about your favorite in the comments. Whether it’s an ancient building with beautiful architecture or a modern library that has every amenity you could want, we want to know what makes it so special to you. And if you haven’t had the chance to visit any of these lovely places yet, put them on your bucket list – they’re worth it!