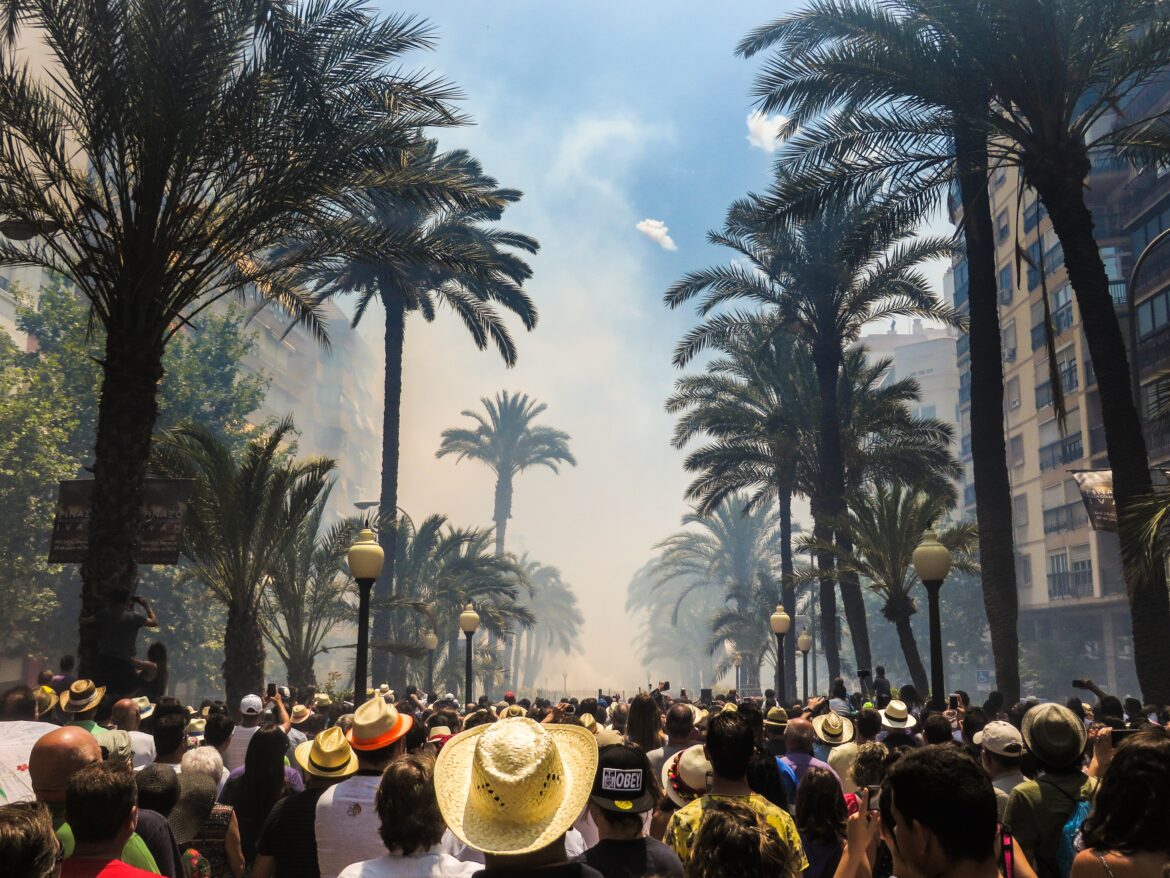 12 Events and Festivals Around the World That You’ll want to visit!

Also known as Coopers Cheese Rolling Championship, Cheese rolling has officially been named an extreme sport. It is not the biggest festival, but it is such a cool one!

It is an old tradition, and the oldest documentation of the sport is dated from 1826, and even then, it was apparent that the event was an ancient tradition. Therefore, it is believed that the event is at least six hundred years old.

The participants race down a 200-yard-long hill after a 4 kilograms heavy round of Double Gloucester Cheese. The first person over the finish line at the bottom of the hill wins the race and the cheese. Have you heard of any other festivals like this one?

In Finnish, “Eukonkanto” or “Akankanto” is a contest where teams perform in pairs. The male competitors race while carrying a female teammate. The first one to reach the finish line wins. Awards for the most entertaining couple, the strongest carrier, and the best costumes are also delegated.

Competitors from all over the world gather in Sonkajarvi, Finland, to race on this unique 250 meters obstacle course. There are different ways to carry the female partner; Piggyback, over the shoulder, and Estonian-style when a wife hangs upside-down with the legs around the male’s shoulders and holds his waist.

Before you panic, don’t worry! The buffet is for monkeys to eat and is not made of monkeys. Each year, on the last Sunday of November, in the Phra Prang Sam Yot temple in Lopburi, Thailand, 3000 long-tailed macaque monkeys are fed massive banquet tables.

The entire city participates, and it is said to bring the town and its people good luck. The festival begins with live performances and dances that draw the monkeys out. Then, the tables are dressed with red tablecloths filled with fruit, sticky rice, salads, and other Thai specialties. It is all designed in colorful shapes and patterns to please the monkeys. It is one of the best cultural festivals out there.

For two weeks every July, you can be one of the thousands of people that attend one of Korea’s most popular festivals. It takes place at Daecheon Bech in Boryeong-si, Chuncheongnam-do. The festival is packed with many mud-themes activities, from sports to skin therapy. The center of the festival is the Giant Mud Bath, located in the Mud Square.

During the day, you can engage in mud massages, mudslides, mud races, mud wrestling, and so much more. When the day is over, it turns into a music festival, playing K-pop and EDM beats that you can enjoy under the night sky.

Burning Man is a festival based on community, art, self-expression, and self-reliance. Although commonly believed, Burning Man is not a music festival. It is an annual event, and of on the biggest festivals. It is held in the Black Rock City in the desert of Nevada, USA. Burning man is named after a significant tradition that takes place every year. It is a symbolic burning of a giant wooden effigy, referred to as “The Man.”

Burning man originated in 1986 in San Fransico but moved to Nevada in 1991. The event is based on ten principles: radical inclusion, gifting, decommodification, radical self-reliance, radical self-expression, communal effort, civic responsibility, leaving no trace, participation, and immediacy. In 2021, it was estimated that the festival had 20.000 attendees, making burning man the biggest festival on this list.

Yes – it is a real thing. Out of the festivals around the world, this is one that we had never heard of. Toe wrestling is exactly what it sounds like. It is an official sport where two opponents lock their feet and toes and attempt to pin each other down with no time limit. It is not uncommon for contestants to get bruises or break a toe or two during the battles.

The game originated in buy four friends in a British pub called Ye Olde Royal Oak Inn in Wetton, Staffordshire, in 1974 because they wanted to invent a sport that the United Kingdom could win. The Toe Wrestling Championship is held at Ashbourne Heights in Fenny Bentley, England.

This is the world’s biggest food fight. La Tomatina is a famous festival held every year on the last Wednesday in August. It is held in the Valencian town of Bunol. The main event, which can attract up to 20.000 people from all over the world, is a giant tomato fight, where participants throw tomatoes at each other. Hence the name “La Tomatina.”

In 1945, some local boys decided to get a place among the retinue of a parade during an event in town. Unfortunately, one of the parade participants fell and lost his costume head, resulting in him having a rage fit and throwing tomatoes from a vegetable stand, leading to a massive food fight in the crowd. The tradition of La Tomatina has been held ever since.

Songkran Festival is Thailand’s most popular festival. It is one of the biggest cultural festivals and celebrates the beginning of the traditional Thai New Year. It is based on the Buddhist calendar, and the Songkran Festival has its name from a Sanskrit word where “Songkran” means “passing” or “approaching.” It takes place in April every year and is one of the many amazing festivals on this list that you should put on your bucket list!

The festival is also known as one of the world’s biggest water fights. Water is poured into Buddha images and on the hands of Buddhist monks as a sign of respect. Moreover, there is a huge water fight, where people meet on the streets and throw buckets of water at each other. Chian Mai is home to one of the country’s biggest Songkran celebrations, but the festival is celebrated all over the country. Bonus: Chiang Mai is hosting the Yi Peng Festival.

Also known as Japan’s penis festival, the Kanamara Matsuki Festival is an annual Japanese festival held each spring at the Kanayama Shrine in Kawasaki, Japan. The main event always falls on the first Sunday in April. The main character of the festival is the penis.

There is a parade, and the entire festival is covered in vegetables, decorations, and costumes in all sorts of penis shapes and sizes. The festival originated in 1969 and has attracted people from around the world ever since. Today, it is used to raise money for HIV research.

The International Hair Freezing Contest is a competition where the participants sculpt their hair by freezing it. One of our ice festival category favorites is held yearly at a resort in the Takhini Hot Springs in Whitehorse, Yukon, Canada.

The participants meet from around the world, sit in a hot spring, and sculpt their wet hair below 20 degrees celsius in freezing temperatures. It takes about a minute until the hair freezes, and the way the hair is sculpted when it is fully frozen represents their entree to the competition. The contests have been held each February since 2011. The different categories are Best male, Best female, Best Group, Most creative, and Peoples’ Choice.

You know that fire air guitar you do when a really good song comes on the radio? You could win a prize for doing that! The Air Guitar World Championships has been an annual event taking place in Oulu, Finland, ever since 1996. If you don’t know what playing air guitar means, it is basically mimicking guitar playing.

The championships have the EcoCompass environmental certificate. One might say that this is one of the festivals in the world that has the absolute lowest ecological impact. The Air Guitar World Championships focus on reducing the environmental strain caused by events, and do what is possible to remain environmentally natural.

Of all popular world festivals, you probably have heard of this Hindu festival before. The Holi Festival in India is a popular ancient Hindu festival. It is also known as “The Festival of Spring,” The Festival of Colors,” or “The Festival of Love.” It is a religious holiday. The festival celebrates Radha Krishna and the triumph of good over evil. The Holi festival is celebrated yearly on the arrival of spring and signifies the end of winter. It lasts for a night and a day. It begins on the evening of the Purnima, which is the day of the full moon.

On the morning after the day of the full moon, there is a festival of colors, where participants smear each other with colors. It is done by hand, with water balloons or water guns. It is a national festival that is held on the city streets. So you can experience this national holiday from almost all of India.

Honorable mentions include dia de Los Muertos in Mexico, the carnival in Rio de Janeiro, the Taiwan Lantern Festival, the USA Mardi Gras Celebrations in New Orleans, and many other festivals. From the biggest music festival to Cannes Film Festival. There are so many amazing festivals all over the world that a million people attend each year, ranging everywhere from a week-long celebration of live music to a religious festival.

The world is a big, beautiful place with endless opportunities for exploration. So if you’re looking for something new and exciting to do this year, consider attending one of the unique events taking place all around the globe. From Oktoberfest in Germany to Rio Carnival in Rio de Janeiro, Brazil, there’s sure to be an event that piques your interest. So get out there and explore the world!